Tecforte was at GovernmentWare (GovWare)  the region’s most established premier conference and showcase for cybersecurity. GovWare is the cornerstone event for the Singapore International Cyber Week. Featuring the latest trends in technology, organisational implementation and user perspectives, GovWare attracts practitioners to network, discuss and collaborate on all things cybersecurity. 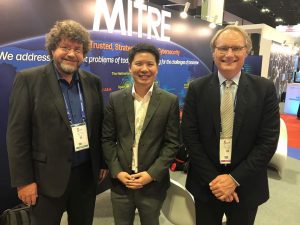 We are honored to be able to meet with MITRE’s key personnel, Mr Richard J Struse and Mr. Robert A.Martin. The Mitre Corporation is an American not-for-profit organization based in Bedford, Massachusetts, and McLean, Virginia. It manages federally funded research and development centers (FFRDCs) supporting several U.S. government agencies.

Mr. Struse is the creator of the STIX and TAXII automated information sharing initiatives which have been widely adopted across the public and private sectors. Mr. Robert Martin is the Senior Principal Engineer at MITRE and spends the majority of his time working with industry on the CWE and CAPEC security standardization initiatives and with the Industrial Internet Consortium.